To close Day Two of ACE12, attendees joined the Allscripts team for a party at Navy Pier, the iconic Chicago theme-park-on-a-dock. Judging by the client reaction, Allscripts lived up to its reputation for throwing some of the best parties in healthcare. There were four Chicago-themed areas for hanging out with colleagues and exploring the neighborhoods, music and cuisine that make Chicago famous.  There was a Summer carnival and Midwestern fair on the rooftop. There was a band for virtually every musical taste — blues, dueling pianos, pop and hip-hop. There was Chicago’s incomparable skyline, and, of course, fireworks over Lake Michigan. 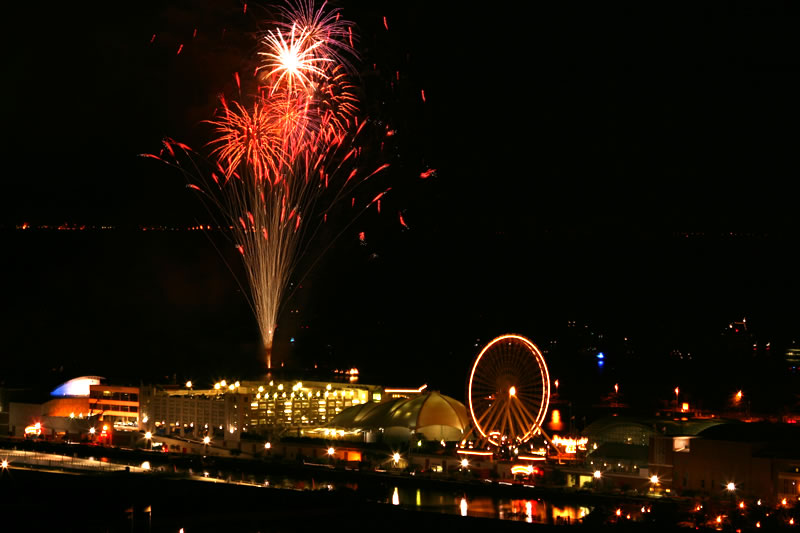 A good time was had by all.

Before heading out to party, though, attendees soaked up more of the meaningful education at the root of ACE12, most of it led by clients. Sessions that attracted serious attention included, to name just a few, several that highlighted the open architecture of Sunrise Clinical Manager:

The slides for these and every other presentation at ACE12 are available for clients to download on ClientConnect.  Download them here.

The 4,000 people packed into McCormick Park weren’t the only ones paying attention to the conference.  This story about ACE12 appeared on HIStalk tonight. Bill Rieger, CIO of Flagler Hospital in Florida (an acute and ambulatory EHR client and one of America’s 50 best hospitals), had this to say about the conference:

“My take on this whole event is that Allscripts is positioned for success. They struggle with the same challenges that all of these HIS vendors do, getting the right people on board when HIT staffing right now is very fluid. If their leadership stays in place and they maintain focus on their direction, they will do well. This conference has increased my confidence in Allscripts as an organization and a partner for our community.”

Thank you, Bill!  We hope to continue to deserve your respect.

Lindsey Dunn, Editor in Chief of Becker’s Hospital Review, attended ACE12 today and by early afternoon had already published an in-depth article based on the morning’s keynote and her interview with Dr. Daniel Kraft.

It’s well worth a read: “Dr. Daniel Kraft Discusses the Future of Medicine at ACE 2012.”

Lindsey also had some nice things to say about ACE12 on Twitter (see below).

Partner Videos: “What does Open mean to you?”

We visited the HUB this afternoon, video camera in hand, to speak with some of the 88 companies exhibiting at the conference.  We asked them just one question: “What does ‘open’ mean to you?”  Take a listen.

One of the many fun activities that kept attendees amused in the HUB was an electronic caricature artist.  Sit down for 5 minutes and voila! – you’ve got yourself a veritable Mort Drucker.

More seriously, Allscripts again supported Dear World, a charity event that produces and displays powerful photographs of individuals with a special message written on their bodies. The idea of the project is that a single person, no matter what background, can influence and inspire many.  You can read more about how these pictures are changing the world.

Here’s a small sampling of the tweets on #ACE12 today. It was fun watching how one thing that Dr. Daniel Kraft said in his keynote this morning went viral, at least on #ACE12.  If you were at the keynote you’ll get it.  If not, just keep in mind that “sim” means simulate.

Todd Stein was editor of It Takes A Community. A former journalist and freelance editor, Stein has worked as a business reporter for The Sacramento Bee and San Francisco Business Times, as producer of HIMSS Newsbreak, contributing editor to California Hospitals and senior writer for NurseWeek. His many articles on healthcare IT and other topics have appeared in dozens of national and regional publications including Healthcare Informatics, Healthcare IT News, Journal of AHIMA, Physicians Practice, The Los Times, San Francisco Magazine and VIA.

Using virtual health assistants for COVID-19 pandemic and beyond

The need for virtual health communication, education and care has never been more urgent. In response to the coronavirus disease

COVID19: How one connected community – an entire nation – fights back

National Doctors Day: Have you thanked your doctors lately?

The urgency and rapid escalation of the current COVID-19 pandemic requires equally responsive IT solutions, and one of the most

The Information Blocking rule: Game changer or not?

On March 9, after many months of industry conversation, advocacy to policy makers, and plain old waiting, the Office of

Allscripts actions and support during the COVID-19 global event

Doing our part to control the COVID-19 pandemic

We need to be optimistic that the thoughtful, proactive steps we are taking will accomplish our goals for containing and

How to streamline telehealth implementation for safer COVID-19 patient encounters

Patient safety is no accident

While we’re disappointed to not have the opportunity to meet with attendees and share our vision during HIMSS 2020, we